Toyota has kept the Aygo X model range super-simple with just one engine available, a 72hp 1.0-litre petrol with a choice of either a five speed manual or an automatic gearbox.

There are four trim levels: 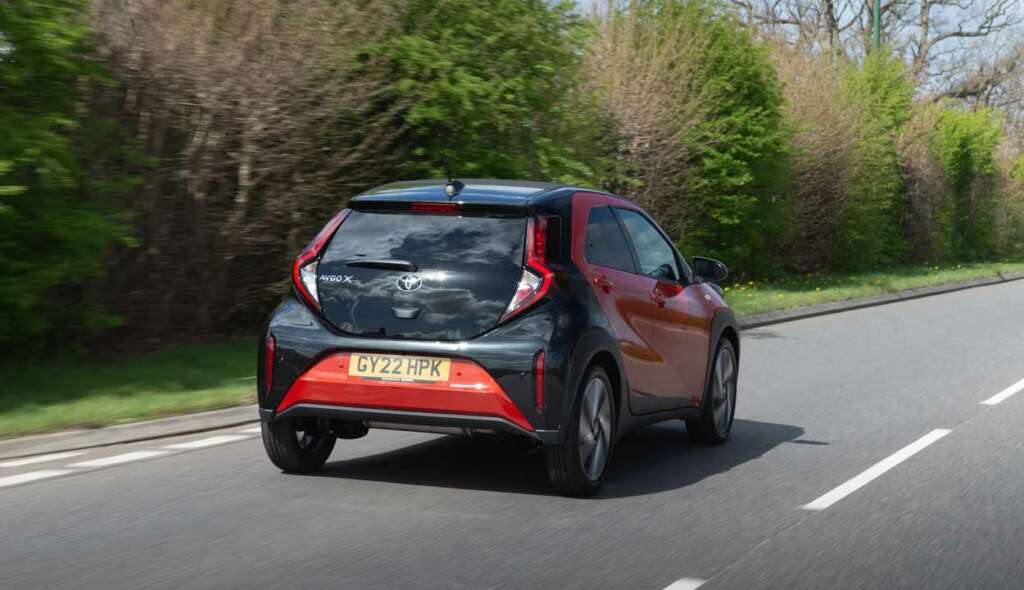 Is The Toyota Aygo X Suitable For My Fleet

While city cars don’t sell in huge volumes in fleets as they aren’t often big enough or practical enough for business requirements, there are some sectors that favour a smaller, less expensive vehicle.

For those sectors, such as the NHS and those running local urban operations, small on the outside is good.

The Toyota Aygo X certainly fits the bill, being only 3.7m long and only just over 1.7m wide, it fits into tight spaces easily, has a great turning circle and has a more than reasonable 231 litre boot. What’s more, the rear seats aren’t an afterthought and have surprisingly good head and leg-room.

However, because it’s uses a petrol engine that isn’t a full hybrid or plug-in, the benefit-in-kind tax position isn’t great thanks to a 110g/km CO2 figure which means it sits in the 27% tax band and has a Class 1A NIC monthly figure or £49, according to Gensen Reports.

Maintenance costs are low too with Gensen predicting a figure of £33 a month.

For fleet needs, a city car barely has to do more than be a low cost way of transporting staff in a local area. However, the Aygo X goes far beyond this basic requirement.

Alongside being surprisingly roomy inside, it’s also incredibly well equipped, particularly in terms of safety kit, and is fun and involving to drive too.

The Aygo X proves that you don’t need high levels of power to offer a fun car to drive. 0-60mph comes up in a leisurely 14.9 seconds, but due to the small size it still feels nimble and almost nippy. It’s also comfortable and has good steering feedback.

The only downside to the lack of power is a tendancy to work the engine harder and that results in a lower fuel consumption. The official figure is 56.4mpg, but we saw 45.7mpg, which for a small car, isn’t that great.

It also means that motorway work isn’t the car’s strong suit, not just due to the (lack of) power, but also the feeling of being smaller than most other traffic and higher levels of road and wind noise that a larger, more expensive, car wouldn’t suffer from.

However, motorway and higher mileage work isn’t why you’d run an Aygo X and around town these negatives aren’t an issue.

In an urban setting the only small negative is a notchy gearbox. It’s not a huge issue, but is noticeable and takes the edge off an otherwise first rate car.

If your fleet needs good, low cost, urban transport the Aygo X is spot on and comes with the added bonus of being fun to drive.