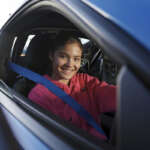 SO here’s a Christmas road test with a difference. It’s not us at the wheel, but with a serve in excess of 100 mph, it’s Emma Raducanu (left) who is no stranger to power, speed, and agility.

The US Grand Slam winner and British No 1 recently took a break from her athletic training schedule to explore her other passion, when she took the wheel of a 198 mph Porsche 911 GT3 at Brands Hatch, Kent.

For the 20-year-old Briton, the day at Brands Hatch was the next step in her driving programme as a Porsche Brand Ambassador. She took her first lessons in summer at the Porsche Experience Centre Silverstone alongside former endurance world champion and Porsche Brand Ambassador Mark Webber. Now the sports car manufacturer invited her to her local circuit to trade the WTA Tour for the track.

Emma has visited the Porsche Carrera Cup GB at Brands Hatch twice this season, meeting the drivers and getting up close to the 911 GT3 Cup race cars in the single marque GT championship. When younger, she entered kart races and moto-cross; now, Emma fired-up her motorsport interest by driving on the 1.2-mile Indy circuit for the first time; and as a special surprise, drove the road-going version of the Carrera Cup race car – the 510 PS 911 GT3.

As Brands Hatch is my local track, I visited with my dad many times when I was younger and always enjoyed watching the races, particularly with the Porsches. It was great to see behind the scenes at the Carrera Cup GB earlier this year, but even then, I only saw the racing from the grandstands. So it was exciting to lap the circuit at speed today, and a real treat to try the 911 GT3.

I loved driving the 911 GT3, it was so much fun to drive, and I learned a lot about the testing and practice that helps build the skills of a champion driver. It was amazing to add to my memories of being a spectator here and now be driving myself. I much prefer being this side of the fence

Brands Hatch is quite a challenging circuit on first acquaintance. Emma was quick to learn the ideal line and the technique of driving on track. Every Porsche comes alive on a circuit, with strong acceleration, precise steering and powerful brakes, but the 911 in particular is bred for it. You can feel this in its rear-engined design, which helps push the car out of the corners.

Emma went on to explain that having Adam by her side had definitely helped to understand the dips and curves of the Brands Hatch circuit as well as  getting to know the 911 GT3 in detail.

It was rewarding to find the ultimate balance between throttle and brake, as I explored the potential of the car. As my confidence and commitment grew, the racing lines started to flow together so I could maintain speed through the corners.

Describing driving at Brands Hatch as another highlight of her year, Emma left the Porsche behind and flew off to the Middle East and South East Asia to continue her tennis and fitness training schedule, ahead of the Australian Open, which commences in Melbourne, 16 – 29 January 2023.

Mycardirect, a car subscription provider, says conditions are right for the business to expand

A new fleet-friendly GT-Line trim level is now available for the 2023 Kia EV6 large family electric car. How does it stack up for business drivers?