…the Mazda CX-60 plug-in hybrid is a large five-seat all-wheel drive SUV with one of the largest batteries of any PHEV which means it will go further in the real world on electricity before you need to resort to the petrol engine.

The CX-60, which is approximately the same size as a BMW X3, has a 17.8kWh battery powering an electric motor and a 2.5-litre petrol engine. Combined power is a healthy 327hp, yet the official fuel consumption is 188mpg.

The Mazda CX-60 is available in three trim levels: 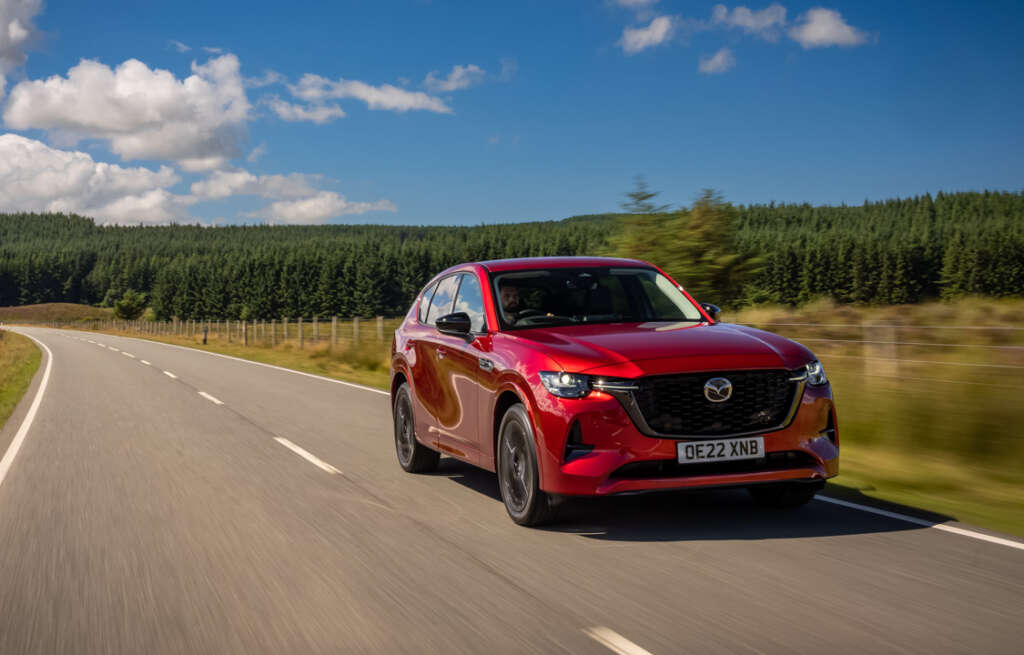 Is The Mazda CX-60 Suitable For My Fleet

Most other plug-in hybrids have a smaller battery, usually around 12kWh, and typically see a 20-mile electric range. What Mazda has done by fitting a larger battery is appealing. The additional electric range means the petrol engine can go without use for far longer. Over a week of testing, almost all of our journeys were done on electric mode. What’s odd is that while the official mpg figure is 188mpg, the trip computer won’t read beyond 100mpg – the figure we recorded.

In practical terms the CX-60 is good too. Boot volume is a claimed 570 litres which is plenty for most drivers. There’s also good rear seat space too.

Lease rates are attractive on the Mazda CX-60 with Intelligent Car Leasing offering the PHEV in Homura trim for £612 a month on a 3+36 contract with 20,000 miles a year.

The decent EV-mode range also means a lower BIK rating (8%) and a low Class 1A NIC cost of £37 a month, according to Gensen Reports.

The CX-60 is not only Mazda’s largest and most powerful car, it’s also the most premium feeling. You sit high up and the cabin has a high quality feel. Pick anything but the entry level Exclusive-line model and equipment levels are impressive too with everything you’re likely to need or want fitted as standard.

Mazda has gone for a mix of buttons and touchscreen controls. While we’re normally in favour of buttons over touchscreen controls, Mazda’s set up throws a curve-ball. Oddly, while the touchscreen works well, Mazda deactivates that function while you’re driving so you have to resort to buttons which makes navigating Apple CarPlay trickier – even if other functions are easier via physical switches.

Driving the CX-60 is simple and straightforward. While there are the usual drive modes, it’s easiest to leave the car in its standard settings and let the car sort itself out.

As mentioned the vast majority of driving can be done under full-electric power. While there’s no one-pedal brake-regeneration mode, the regen level is well judged and easy to live with. When the petrol engine does step in, it is noticeable and not quite as smooth as some rivals’ systems.

In everyday driving the CX-60 ride is refined and comfortable, although that refinement to the suspension means you can occasionally hear other mechanical and electrical systems operating within the car at lower speeds. For a large and relatively weighty SUV, the CX-60 also drives well if you’re on an open B-road. There’s little body roll and while there’s not much in the way of steering feel, the car is easy to place on the road and the combination means the Mazda is on the sportier side of the fence for this class of car.

However, it’s the big battery and associated range that is the real win for the CX-60. That fact makes it just a bit more appealing for those that can’t quite go fully electric.

FleetandLeasing.com Verdict On The Mazda CX-60